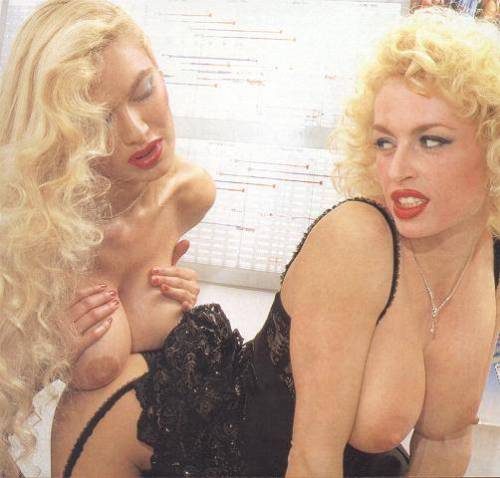 Sibylle
She was born Erika Roswitha Rauch in Munich, Germany. She was the Playmate of June 1979 in the German edition of Playboy, and appeared fifteen more times. She also appeared on several films, most notably starring the main role in several chapters of the Israeli film series Eskimo Limon. In 1982 she debuted as a singer, with the single "So Long, Goodbye / Playmate".
She entered the adult industry in 1987, accepting a 100,000 Mark salary offered by the former porn actress and then producer Teresa Orlowski to star in the two-parts pornographic film Born for Love. She later appeared in more than 20 pornographic films.
Her real life events inspired the 2001 two-parts RTL TV movie Das sündige Mädchen; her role was played by Anna Loos.
In 2004 she was heavily injured by the performance artist Marko König during the rehearsal of a stage show.
In 2012 she appeared in a series of commercial shorts promoting the company "GogoMil".

Sylvie
Sylvie Rauch was born on May 20, 1962 in Munich, Germany. She is an actress, known for Crossclub: The Legend of the Living Dead (1999) and Bad Taste: der Kult um den schlechen Geschmack (1999).

Softcore Movie 1980
In this standard Bavarian sex comedy, three Bavarian farm-boys are on their way to a cattle show at Avignon, with their prize stud-bull 'Prince of Bavaria'. Unfortunately, when they end up in St. Tropez, they cause havoc on the 'topless' beach, become involved in a mail robbery, and lose their bull.

The Ultimate Fucking Girls  2
Carmen Moore, Emanuelle, Olivia De Treville, Olivia del Rio, Rita Cardinale, Sibylle Rauch, Sylvie Rauch, Shanon Stone, Andrew Youngman, Steve Holmes, Zoltan Kabai, Leslie Taylor, Rodolphe Antrim
The Ultimate Fucking girls will fuck your brains out they're sexy and ohh so kinky! When one of the girls goes for a doctor visit she gets more then she bargained for like getting every inch of her sphinkter and cunt examined by her doctor's cock. As she moans in pure delight she places his cock in her pretty mouth and begans to suck him off He returns the favor by going on a deep explortion of her asshole! Cum join this Mega Orgasmic tale!